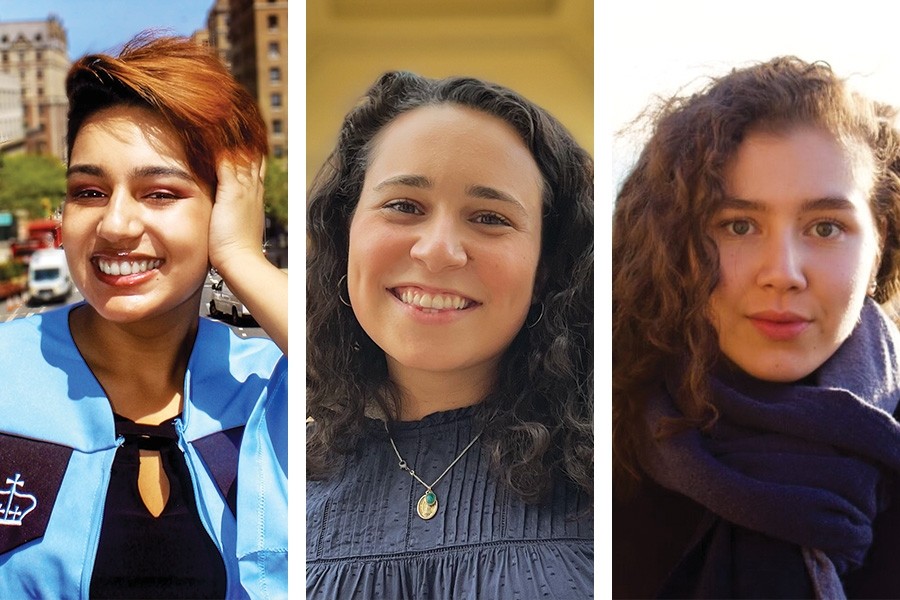 Two College students and one alumna have been named 2023 Rhodes Scholars, the first time that Columbia has seen three of its own selected as part of the U.S. cohort.

Sophie A. Bryant CC’23, Astrid Liden CC’23 and Ilina Logani CC’22 were among the 32 Americans chosen for the prestigious scholarship, which provides funding for two or three years of postgraduate study at Oxford.

“I am thrilled to see Sophie, Astrid and Ilina recognized in this way,” said Ariella Lang, associate dean of academic affairs and director of undergraduate research and fellowships. “They are part of an inspiring group of nominees and finalists. I want to recognize as well the faculty, advisors, staff members, alumni recipients of this award and many others who so generously supported, mentored and cheered on our applicants.”

Rhodes candidates must be nominated by their university before going through an extensive application process. Criteria include academic excellence, a commitment to the welfare of others and to contributing to good in the world, and evidence of good character and promise of great leadership. The 2023 selection process for international candidates is still ongoing; more than 100 total scholars will be named, from more than 60 countries.

Bryant is double majoring in East Asian language and cultures and mathematics. Originally from Moscow, Bryant lived in Shanghai for five years before moving to Port Henry, N.Y., in the Adirondacks. Her experience abroad sparked her curiosity in urban-rural divides, cross-cultural exchange and educational equity. With professional and academic interests that live at the intersection of ethnography, education and foreign policy, Bryant has pursued research experiences with organizations including the Council on Foreign Relations, PEN America, the Brookings Institution and Carnegie China. These engagements solidified her interests in Chinese domestic and foreign politics, Central Asian security and Sino-Russia relations.

On campus, she is the co-editor-in-chief of The Birch, an undergraduate journal committed to Slavic, Eastern European and Eurasian studies. Bryant is also active in educational service and advocacy work, including teaching English to Ukrainian refugee children through Project Rosseau, and developing philosophical logic curricula through Blocks Education; the latter is designed to allow elementary school-aged students to develop skills in critical thinking, argumentation, logical reasoning and experiential learning. Bryant spends part of every summer working at her family’s bed and breakfast in Upstate New York. In the long term, Bryant hopes to pursue a Ph.D. in social anthropology with a regional focus on China before conducting foreign policy research at a think tank. At Oxford, she intends to pursue an M.Phil. in global and area studies.

Liden, who is from Eden Prairie, Minn., is a double major in Latin American and Caribbean studies and political science. Raised in both Venezuela and the United States, Liden is keenly interested in immigration policy. As a Laidlaw Scholar, she pursued research centered on the impact of Covid-19 on Venezuelan forced migration in Latin America, work that led to an internship in Santiago, Chile, where she conducted research in the lead-up to the rewrite of the Chilean Constitution regarding migration policy. As a Mellon Mays Scholar, Liden’s research examined another aspect of the Venezuelan migration crisis, namely its impact on the family, work that will contribute to an honors thesis in Latin American and Caribbean studies.

Liden has volunteered locally and regionally with several nonprofits, including the International Rescue Committee, where she provided support for unaccompanied migrant children, and Venezuelans and Immigrants Aid, where she works to provide resources for Venezuelan forced migrants and asylum seekers in New York City. Liden is also co-president of Columbia Catholic Ministry, a tour guide and intern with Columbia Undergraduate Admissions, a founding member of the Venezuelan Students Association, the secretary-general for the CESIMS Model United Nations conference and a music director for The Columbia Metrotones a cappella group. In addition, Liden works closely with the Columbia Institute of Latin American Studies and Columbia Global Center, Santiago. In the long term, Astrid hopes to work in migration policy particular to the case of Venezuelan forced migrants in Latin America, the United States and internationally. As a Rhodes Scholar, she will pursue an M.Sc. in refugee and forced migration studies and an M.Sc. in sociology at Oxford.

Logani majored in economics and received the David Estabrook Romine Prize for Best Senior Thesis. Originally from Spokane, Wash., Logani founded the Spokane Youth of Color Coalition, which provides both a long-needed affinity space for youth of color in Spokane and a resource center to help BIPOC youth develop skills and receive aid in a diverse array of areas, from financial literacy to educational resources. Logani also was a research fellow in the office of Washington lieutenant governor Denny Heck, where she was first author on two white papers that examined the state’s affordable housing crisis and the economic implications of racial discrimination in housing.

Among her many other activities at Columbia, Logani was a co-founder of and teaching assistant for “Frontiers of Justice,” a student-developed course that seeks to bridge the gap between Columbia students and surrounding neighborhoods through jointly authored, multidisciplinary policy proposals between community leaders and students and through conscientious volunteering. Currently, Logani is a Menard Family Pre-Doctoral Research Fellow at the University of Chicago’s Harris School of Public Policy, where she conducts research on income inequality and poverty with a focus on studying mortality rates among homeless individuals in the United States in the hopes of generating the first national estimate of homeless mortality. As a Rhodes Scholar, Logani seeks to pursue advanced study in comparative economic policy analysis, with the ultimate goal of pursuing a career in policy analysis, policy design and legislation, which will allow her to work more effectively toward economic and educational justice. To that end, she will pursue an M.Phil. in comparative social policy at Oxford.