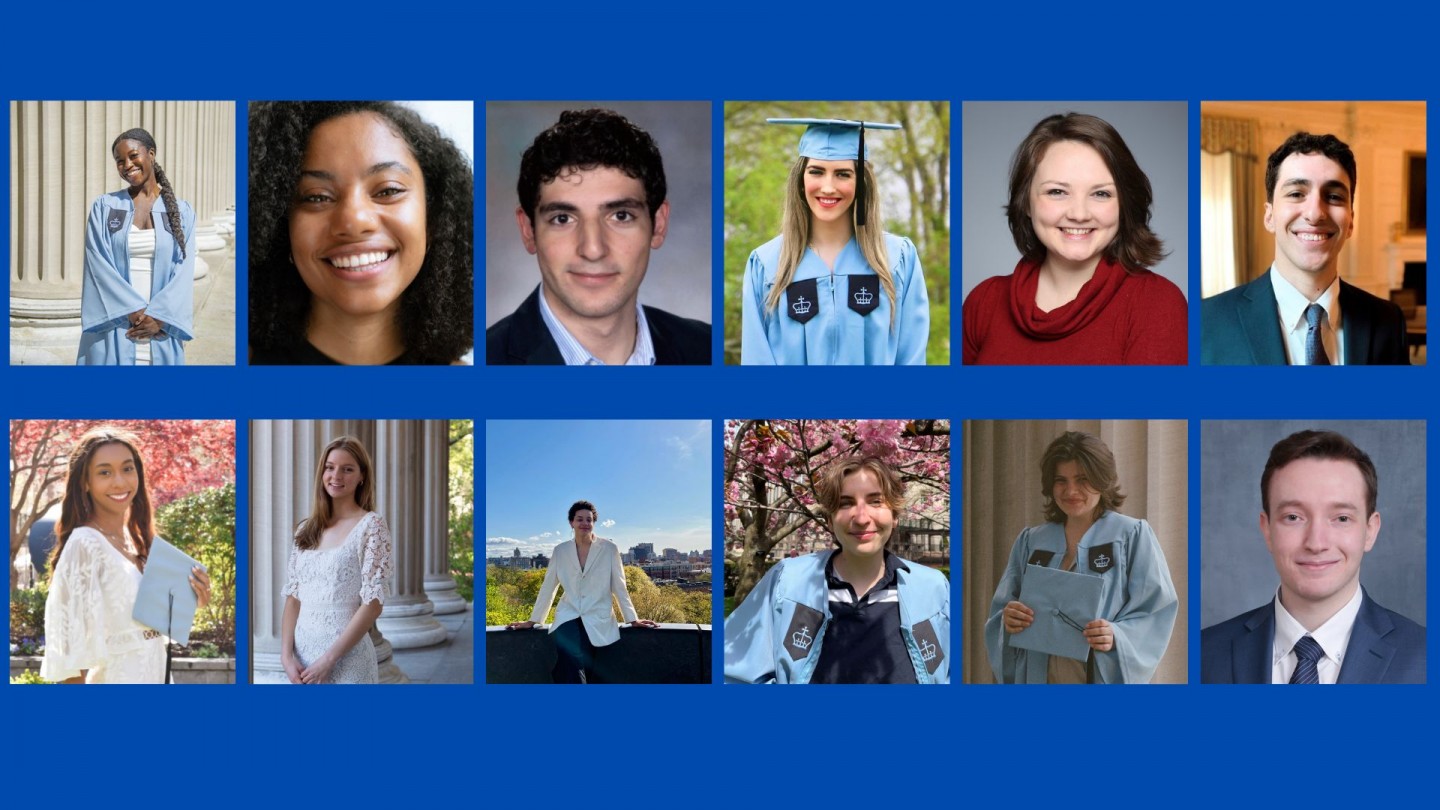 Sixteen Columbia University affiliates have been awarded 2022-2023 Fulbright U.S. Student grants, which offer funding for students and young professionals to undertake individually-designed international research and study projects or primary and secondary school teaching in English-language classrooms around the world.

Read below to meet the 2022-2023 fellows and learn more about their upcoming adventures!

Originally from Irvine, California, Andrea Akinola graduated Columbia College with a major in Political Science and a concentration in Education. As a Fulbright English Teaching Assistant on the Canary Islands, Spain, Andrea is excited to bring her passion for social justice into the classroom. She hopes to engage her students in dialogue and empower them to take action on matters that are important to them and their communities.

Bella Barnes, CC '22, majored in English at Columbia College. She arrived to Columbia from Kansas City Missouri and, while at Columbia, taught social entrepreneurship courses through CORE's Building Blocks program to high school students at Columbia's Global Centers in Amman, Jordan and Istanbul, Turkey. Additionally, she volunteered as a Spanish interpreter with New Sanctuary Coalition, working pro bono legal defense cases for climate refugees seeking asylum in the US. She looks forward to continuing to advocate for migrants' rights to citizenship, in addition to sharing her love for intercultural exchange while teaching English in the Canary Islands, Spain this year through the Fulbright.

As a Fulbright Scholar at the University of St Andrews, New York native Kavin Chada will continue his study of philosophy, specializing in Kant’s moral philosophy. His long-term philosophical project, which he began during his senior undergraduate philosophy thesis at Columbia, involves a synthesis of Kantian philosophy and modern Buddhist practice, aimed at providing the foundation of a secular Buddhist understanding of ethics and transforming Western religious practice. Kavin majored in Philosophy at Columbia, with a special concentration in linguistics.

Katie Curran majored in American Studies at Columbia, focusing on law, history, and education. While at Columbia, she tutored first-generation low-income college-bound youth from Harlem and Washington Heights at the Roger Lehecka Double Discovery Center. Originally from Cape Cod, MA, Katie has pursued her MA in History at Oxford for the last two years, where she has continued to foster her strong passion for foreign languages and teaching. She hopes to further combine these interests through the Fulbright ETA program in Spain.

Originally from Charlotte, North Carolina, Katherine De Chant graduated in 2016 from Columbia College with a degree in English and Comparative Literature. This autumn, Katherine will be pursuing a Masters in Advanced Global Studies at Sciences Po in Paris through the Fulbright US Student Program. At Sciences Po, Katherine intends to specialize in human rights and humanitarian action with a thematic concentration in gender studies, and she hopes to eventually work with nonprofits and think tanks that aim to advance women's and LGBTQ+ rights internationally.

Joshua Elias, CC’21, concentrated in political science and, while at Columbia, he took courses in Central Asia and the Middle East that constantly referenced, but rarely dived into, the Caucuses. Originally from Miami, FL, as a Fulbright English Teaching Assistant Joshua will travel to Lankaran, Azerbaijan, where he is excited to learn more about this unique region of the world and prepare for a career of promoting mutual understanding in the U.S. Foreign Service.

Jose Esquer, of Escondido, CA and a GS’21 graduate who pursued a major in human rights while at Columbia, will join the English Teaching Assistantship program in Colombia in 2023.

Gavin Goodrich studied music and mathematics while at Columbia and hails from the San Juan Islands in Washington State. As a Fulbright Scholar in Spain, he will serve as an English Teaching Assistant in Galicia. While there, Gavin is eager to integrate musical practice as a composer and pianist into the local music scene, all the while sharpening his language skills in Spanish, Galician and Ladino.

Through the Fulbright U.S. Student Program, Skylar will pursue a Master's Degree in Korean Studies at Yonsei University in Seoul, South Korea. Originally from Atlanta, GA, Skylar began formally studying Korean during her first year at Columbia. Then, in the summer of 2019, Skylar was awarded three fellowships to study in Seoul at Ewha Womans University. Since then, Skylar has continued studying Korean language, and has combined her interest in Korean culture with her major in Sociology and concentration in East Asian Studies. Through her Master’s Degree, Skylar aims to gain a deeper understanding of cross-linguistic cultural exportation, while specifically focusing on the flow of popular culture across the unique sociolinguistic landscapes of the United States and Korea. In the future, Skylar hopes to work in international marketing and strategy, and eventually pursue a PhD in Sociology.

As a Fulbright Scholar in Italy, Kate Johnson will work with local beekeepers and Dr. Luca Fontanesi of the University of Bologna to study human viruses found in bee products such as honey, beeswax, and propolis. Kate hopes to develop a novel viral analysis approach that can be used to study the distribution of pathogenic viruses across the region. Kate, originally from Napa Valley, CA, majored in Neuroscience and Behavior at Columbia College.

Samuel Klein-Markman, resident of Oakland, CA and a double major in music and political science while at Columbia, has developed a unique project that will allow him to study a unique lineage of guitar composition and performance with renowned experts in the Brazilian guitarist tradition. Samuel looks forward to bringing his extensive experience as an accomplished American guitarist into conversation with Brazil’s distinguished history of guitar music and learning more about its myriad, complex development of new ways to use the instrument.

Ky Mahar Luther attended Columbia College majoring in Urban Studies, and Education Studies, with a specialization in Creative Writing. They are passionate about volunteering, mutual aid, and working in their communities to both learn and educate about on environmentalism and environmental racism. They believe creative expression is fundamental to connecting and healing communities and hope to work in the future in sustaining communities through sustainable urban planning and creating accessible and equitable educational opportunities. Ky is originally from Fairfield, CT and will join a classroom this fall as an English Teaching Assistant in Uganda.

Franziska Nace has been awarded an English Teaching Assistantship to Semey, Kazakhstan, a city in the northeast of the country. As a graduate of Columbia College and native of Pittsburgh, PA,, Franziska studied English Literature with a concentration in Russian Literature and culture.

Isa Pierce, originally from Katonah, NY, graduated this spring from Columbia College with a degree in Linguistics, with research focusing on queer and gender nonconforming language emerging in Russian. As a Fulbright ETA in Georgia, they will continue to engage with topics of Post-Soviet linguistic identity and queerness while fostering their joy of teaching. They are incredibly grateful to their friends, family, and professors who have helped them reach this point. Upon their return to the US, Isa hopes to pursue a PhD in Linguistics.

Maryam Rahaman, from Syracus, NY, pursued a major in English while at Columbia, and will join the English Teaching Assistantship program in South Korea.

Steven graduated from Columbia College in 2022 with a B.A. in Neuroscience and Behavior. Originally from Brooklyn, NY, Steven looks forward to the Fulbright US Student Program, where he will join the Karolinska Institute in Solna, Sweden to research medical mistrust in the Swedish HIV+ community in order to investigate tactful patient outreach methods amidst severe disease stigma. Steven hopes this project will inform a long-term career in medicine, which he can both directly assist patients and better facilitate their entry into the healthcare system.

Students or alums interested in the Fulbright U.S. Student Program are encouraged to connect with Undergraduate Research & Fellowships to discuss further