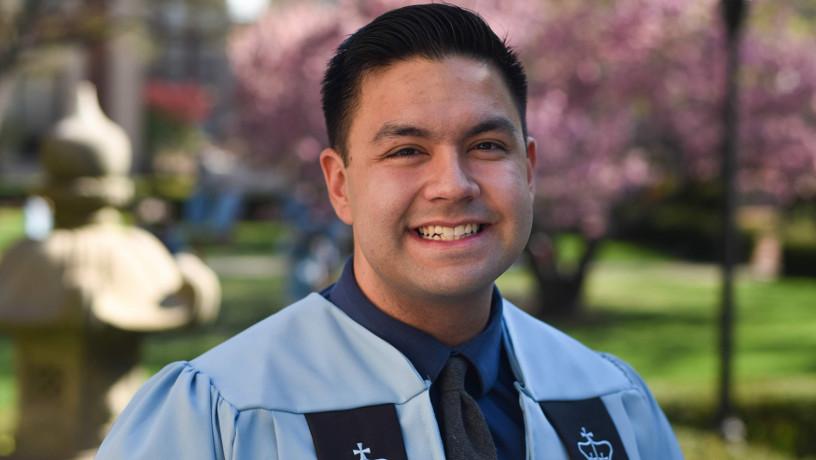 As part of his Fulbright independent research project, Samuel Castro ’19 will study methods for reducing HIV transmission in Mozambique.

As the winner of a Fulbright scholarship, biomedical engineer and public health researcher Samuel Castro ’19 will soon spend nine months in Mozambique exploring how to reduce transmission of HIV from pregnant mothers to their fetuses.

The expedition extends research he began in the southeast African nation last summer as a Minority Health and Health Disparities Research (MHIRT) Fellow with the Columbia University Mailman School of Public Health’s ICAP program, which focuses on large-scale, evidence-based interventions improving services for preventing and treating HIV, tuberculosis, malaria, and other diseases. For two months Castro helped pilot an early infant diagnosis program, working out of both the capital, Maputo, and the northern province of Nampula.

“Through my Fulbright independent research project I hope to better understand the stigma surrounding individuals who seek and use HIV services in Nampula,” he said. “My aim is to understand what factors contribute to poor adherence to medication and lack of follow up after initial diagnosis—specifically, what are the major health psychosocial stressors mothers face during pregnancy that may lead to higher transmission rates? What is the baseline knowledge that husbands have? What are the attitudes of the local community?”

The federally-funded Fulbright program provides a monthly stipend in addition to covering room, board, and transportation. Before departing for Mozambique in September, Castro will first join a training program at Northwestern University alongside other Fulbright scholars headed for sub-Saharan Africa.

Overall, biomedical engineering has not only changed how I think about our bodies but also empowered me to rethink how I approach all problems. Just like engineering, public health is a field that involves lots of different variables, processes, and output that all need to be analyzed.

Long interested in biology, math, and international governance, the Los Angeles native came to Columbia to pursue a “renaissance education,” grounding engineering in a broader context of policy and the humanities. This past January, he also traveled to India as a founding member of Mossy, a startup honing a customizable system that combines both conventional HEPA filters and hardy natural moss to clean and humidify indoor air, which competed in Columbia’s Urban Works Design Challenge. Three winning teams were selected to spend ten days in Mumbai meeting colleagues and visiting worksites.

“Our project truly demonstrated the power and importance of interdisciplinary work as students from biomedical engineering, chemical engineering, and the School of International and Public Affairs came together in an attempt to solve a global health issue,” Castro said. “Going to India and performing customer discovery to understand how our product can best fit in the market is something no lecture or textbook could have taught me.”

Counting Professor Tal Danino of biomedical engineering among his mentors, Castro ultimately focused his engineering work on cancer research using the power of synthetic biology to deploy bacteria to deliver therapy directly to tumors. His experiences with ICAP, and projects as an undergraduate fellow for the medical school’s Program for Education in Global and Public Health in the Dominican Republic, inspired him to apply the skill sets he’s acquired as an engineer as broadly as possible.

“Overall, biomedical engineering has not only changed how I think about our bodies but also empowered me to rethink how I approach all problems,” he said. “Just like engineering, public health is a field that involves lots of different variables, processes, and output that all need to be analyzed.”

When he returns from Mozambique, Castro plans to earn a joint MD and master’s in public health to continue in global health and medicine using evidence-based interventions to serve low-resource communities. He hopes to become a researcher and physician working with organizations like Doctors Without Borders and the World Health Organization to reduce global health disparities.

Castro isn’t the only Columbia engineer to win a Fulbright this year. Civil engineer Matthew Dalrymple ’16, who has been serving as a design engineer managing green infrastructure projects for Philadelphia Water, will study urban development in Germany next year. He will be stationed at Technische Universitate Berlin, focusing on processes of user-driven urban development.