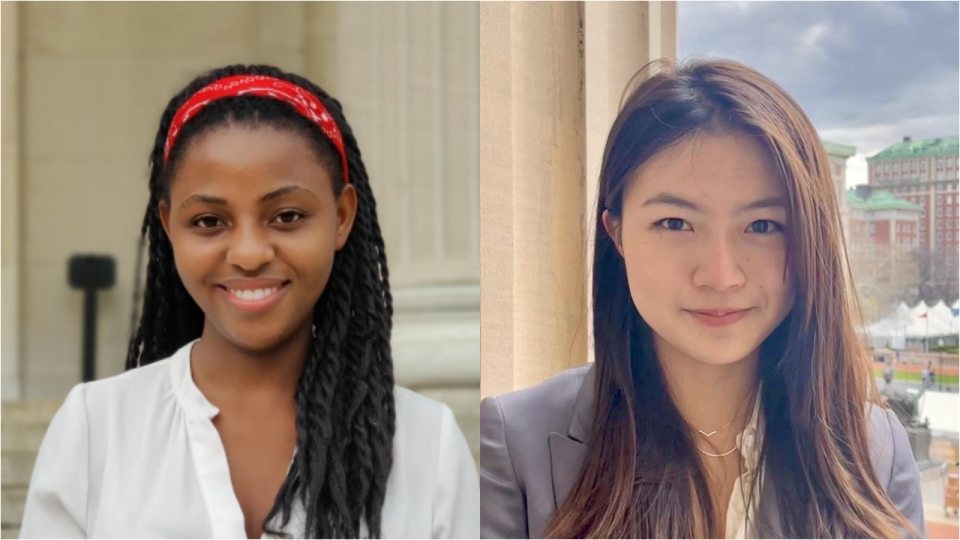 Julia Zhao, SEAS'23, has been named a 2023 Rhodes Scholar for China. China awards four Rhodes Scholars each year, and this is the second time that Columbia has had a Rhodes China Scholar named. “Julia has made such wonderful contributions to the Columbia community and beyond—we’re excited to see what she’ll do next,” said Ariella Lang, associate dean of academic affairs and director of undergraduate research and fellowships.

Julia is a senior majoring in Biomedical Engineering, with a minor in Computer Science. She has undertaken various research projects spanning immunology, cancer biology, and computational genomics since high school, first at UC Berkeley and then at Columbia, where she transferred as a sophomore in 2020.

At Columbia, Julia has been a member of Professor Dana Pe’er’s lab at Memorial Sloan Kettering, where she works on delineating early drivers of tumorigenesis in pancreatic cancer and developing an original machine learning algorithm to study cell fate transitions. She also volunteers in MSK’s clinic. Outside of the lab, Julia has interned in pharma, healthcare consulting, and startups. On campus, Julia is the VP of Tau Beta Pi Engineering Honor Society, leads a project at Systems Biology Initiative, dances with Orchesis, and has worked on outreach efforts in Uganda. She was named a 2022 Goldwater Scholar.

As a Rhodes Scholar, Julia plans to pursue graduate studies in Engineering Science. In particular, she seeks to focus on Clinical AI in low and middle-income settings in an effort to ensure increased access to healthcare within these communities in the future.

Gloria Charité CC’23 has been named the 2023 Rhodes Scholar for the East Africa constituency, the first Columbian to be named a recipient from the region.

The Rhodes for East Africa, which launched in 2018, selects a single scholar each year; applicants come from Uganda, Tanzania, Rwanda, South Sudan and Burundi. “Gloria has been such a wonderful advocate for the student community here at Columbia. I know she’ll do wonderful things as a Rhodes Scholar, at Oxford and beyond,” said Ariella Lang, associate dean of academic affairs and director of undergraduate research and fellowships.

Charité is majoring in psychology. Originally from a small village in the western part of Rwanda, she came to the United States for the first time in 2019, when she was admitted to the College. A member of Columbia’s first-generation and/or low-income community, and admitted as a Kluge Scholar, Charité has remained deeply committed to advocating for other students from under-resourced backgrounds, and to thinking about how she can understand and engage with systemic inequalities in ways that respond to these disparities.

At Columbia, Charité joined Social Interactions in Groups and Organization (SINGO)
at the Business School; among other things, she is working with Modupe Akinola, the Barbara and David Zalaznick Professor of Business, to develop a syllabus for a class that will give enrolled M.B.A. students an opportunity to spend a week in Rwanda learning more about its culture, research and investment landscape. Charité is also co-founder and president of the Adventist Christian Fellowship at Columbia University, a recently recognized student group that, among other activities, collaborates with nearby churches to cater to the needs of the unhoused and other vulnerable populations in New York City. In addition, she has served as a peer academic skills consultant, supporting fellow students by providing one-on-one training on effective learning strategies.

Committed to building research resources in Rwanda, Charité has undertaken psychology research, with an interest in understanding the functioning of memory systems. She contributes to the work of the Columbia Dynamic Perception and Memory Lab as a research assistant. In 2021, she was named a summer intern for the Rwanda Psychological Society, where she founded an initiative to increase the number of psychology and neuroscience researchers in Rwanda — a project she hopes will culminate in an advanced mind and brain research institute. Charité also is an editor of the Columbia Undergraduate Science Journal.

Looking ahead, Charité aspires to contribute in meaningful ways to the field of memory studies, and to use memory research to improve education outcomes in Rwanda and other developing nations. At Oxford, she intends to pursue a doctorate in cognitive psychology.